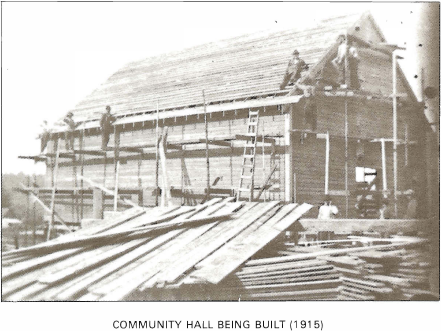 Our Community Hall was built in 1914. The ground where the hall is located, which consists of 1/4 acre, was donated by Andrew Johnson, Hilma Wingert’s father.

For the lumber, the men went along the beach and fell trees that were easy to get out. August Carlson also donated’ trees for lumber. Jim Edgbert, Arthur Wingert, and Alan McKay used two teams of horses to haul the logs out of the woods, Then they were rafted and towed by the “Marie”,owned by Raymond and John Haskell, and the “Levina”, owned by Ed Cowan, to the sawmill at Taylor Bay. When the lumber was finished, it was towed back to the Island in a scow by the “Marie”. Horses and a wagon were used to haul it from the bay to the location of the hall.

The main carpenters were the Sund brothers, John, Bill and Oscar, from Stadium (near Grapeview). Islanders taking part in the building were: Lee Carlson, Ed Wilson, John Wilson, Arlo Wingert, Arthur Wingert and Paul Hitchcock. This was just for the main hall. The dining room and kitchen were added later. Potluck picnics often went along with the work parties.

In 1916, the lean-to, consisting of dining room and kitchen,were added by Bill Sayers and helpers Tony Goetsch, Wilson, Carlson and several others. The old large black camp stove used in the kitchen for years was donated by Mark Reed of Simpson Logging Company. The kitchen was small and dark with a steep flight of steps going down the outside on the south end of the building and leading across a little stream to a couple of out-houses. There was no water in the hall and it was lighted by gas lamps. When there was a”doings”, we hauled water and wood from home or borrowed it from the neighbors. There were many doings those good old days with people coming by boat from Agate, Stadium and Vaughn. All these dances were to raise money for our stage, sealing the kitchen and dining room, and a maple hardwood floor. The proceeds also later bought a 4 cycle gas engine light plant, which was underneath the hall. It popped away and quite often stopped and the lights would go out,to the delight of the dancers, but it wasn’t so good when it stopped in the middle of a school program. It’s often been said, “It’s a wonder the hall didn’t burn down.” In fact a Christmas tree did catch on fire in 1915 or16 from lighted candles. It could have been a terrible disaster. There were about 100 people in the hall and, the weather being cold, all the doors and windows were close? (The door was originally installed to swing in, but was changed to swing out shortly after the fire). Two quick thinking men, Paul Hitchcock and Arlo Wingert, were able to douse the fire in seconds, saving the hall and possibly a lot of lives.

Later, the ladies’ restroom was built under the building,with steps going down from the ante room. The ante room was often used as a little nursery where the children were put to bed while mother and dad danced.

This hall is a Community Hall and not a Grange Hall, as many people think. The Grange, for a number of years from 1924 on, had a”Harvest Home Festival” in the fall of the year, using pumpkins,grapes, corn stalks and autumn leaves for decorations. In those days, the dining room table was one long table from one end of the dining room to the other. It was always laden with the usual good food the Island ladies prepared.This event, which was free, included a program and dancing, besides the food, and became so popular that huge crowds came from all over, so it had to be discontinued.

The ceiling was built high in the main hall so that the building could be used as a community athletic center. Basketball and volleyball were often played. The hall was heated by a big wood heater with a lift-top lid, which could accommodate a huge chunk of wood.

The piece of land across the road from the hall was acquired later by Bill Goetsch. Community Club members wanted to make it into a community picnic park. Tables, benches and a covered kitchen were built at onetime.

For many years the Islanders worked to bring Public Power to the Island and, in the late 1940’s the hall was lighted by electricity. Money was donated by everyone for the wiring of the hall. Dances were held quite often to raise the $5.00 a month charge — whether the power was used or not. Then came the time to modernize, so a pump house was built and a pump installed to provide running water for the hall. Then a sink and cupboards were installed.Bathrooms were put in on the north end of the dining room. The dining room and kitchen were painted. The kitchen, which has seen many stoves through the years, now boasts an electric stove. Two oil burning stoves provide the main source of heat.

Many hours of hard work were put in by our Island musicians,who often donated their musical talents to the dances held every two weeks to raise money to put in our beautiful hardwood floor. The Island has been very fortunate through the years to have our own musicians and a variety of instruments — piano, saxophone, violin, banjo, accordion and drums.

At present, we are working toward completion of a badly needed new roof. A great deal of expense is involved and we’re hopeful that the Island community will again respond to this need, so that the Hall may continue to serve our community and its clubs and organizations as it has for so many years in so many ways